On August 9th, Gen2, LLC and its European Counterparts executed the closing of the contractual agreements for an MSW to Power Project in Europe.  Gen2 is employing a world class EPC contractor to oversee the acquisition of equipment, construction and technology implementation for this project. 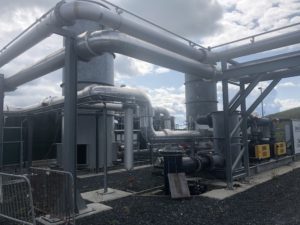 Long term financing is in place and soon construction will be commenced, of a 10 Megawatt, multi-million dollar, Municipal Solid Waste (MSW) to energy facility in Northern Europe. Nearly two years in the planning and structuring, the plant will safely deliver 10 MW of power into the grid system with an estimated project life expectancy in excess of thirty years. The project has been rated investment grade from an independent third party rating agency relying on positive metrics such as the emissions profile, which will be well within the limits of both the United States and European E.P.A. rules and regulations. This facility will become the new standard in excellence and will commence a new era of clean and renewable power for the region. An official announcement regarding details of the scope of the project will be forthcoming